How the Left Stabbed Israel in the Back 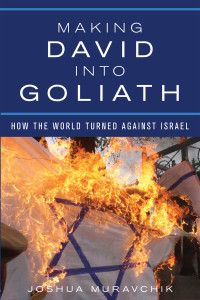 Following the announcement of an agreement concerning Iran’s nuclear program amongst the P5+1 (China, France, Russia, the United States, the United Kingdom; plus Germany), critiques about the deal emanated mostly from the United States and Israel. Some have argued that the deal, despite its flaws, is the best realistic option for avoiding a possible war, or even an inevitable war according to some, with Iran and the best way to prevent Iran from obtaining a nuclear weapon. Pro-Israeli observers have warned that Israel would face increased insecurity as an Iran without sanctions would have more spare cash to fund Israel’s enemies, especially Hezbollah. In this environment when Israel’s security has reentered public debates, reading Joshua Muravchik’s Making David into Goliath: How the World Turned Against Israel would be an excellent primer for anyone who wants to understand a pro-Israeli perspective on how the Jewish state went from the world’s darling to the world’s pariah. More specifically, the book details how the left turned against Israel.

The Israeli state was initially well-respected in the international community, especially amongst socialists who saw Israel as an excellent example of how leftist policies could prosper. For nearly 30 years, “Labor Zionism” had developed a socialist system including cooperative farms and collectives while still preserving democracy, which was an important success since the communist model utilized dictatorships. This combination of Zionism with leftist politics thus allowed the Israeli cause to find sympathy with non-Jews. Even American union leaders and civil rights leaders such as Martin Luther King, Jr. supported Israel during the Six Day War in 1967. However, after this war when Israel had conquered territory from the Arabs, “Israel became the overlord of millions of Arabs.” Israeli leaders had expected these conquered Arabs would go to the neighboring Arab countries in exchange for land taken during the Six Day War, but these countries refused. “And, as time passed, the once nebulous sense of national identity among Palestinians […] began to crystallize. Thus, not only did the Israelis occupy territory that the Arabs claimed as theirs, but they had become ‘occupiers’ in a second, more fraught sense- standing between another people and its national aspirations.” Thereafter, as Muravchik chronicles, the “New Left” shifted the debate from a Marxist focus on class conflict to a focus on race conflict: “Once, Zionism had tapped into that older Leftism, seeing itself as a workers’ movement. But in the latter twentieth century […], it became redefined against its will as a movement of white people competing for land with people of color. This transformation meant that from then on the Left would be aligned overwhelmingly and ardently against Israel.” The much-loved David had thus turned into a much-hated Goliath.

Though Israel had developed regional military supremacy, the Arab countries still had strong economic power since it could cut off oil supplies to Israel’s potential allies. This “oil weapon” had been ineffective in 1967 because the United States had enough spare production capacity to make up for what the Arab countries refused to export, but the dynamics had changed dramatically by the Yom Kippur War in 1973. In spite of the oil weapon threat, the United States continued to provide Israel arms, but most of the European countries, who were much more reliant on Arab oil, attempted to appease the Arabs. This war gave anti-Israeli socialists in Europe the impetus to shift their governments’ sympathies from Israel to the Arabs and the Global South. Eventually, countries like Austria, Portugal, and Spain would even host Yasser Arafat on official visits, even though he was not an official head of state.

Though the vast majority of the book targets Israel’s leftist critics, Muravchik does address how some of Israel’s actions have damaged the state’s international standing. First, Israel shifted away from socialist politics in 1977 when Menachem Begin became Prime Minister. This shift alienated some of Israel’s previous international sympathizers on the left, and Begin’s rhetoric was either harsh or undiplomatic. The government also began to encourage settlements in the West Bank so that a future left-leaning government would not be able to surrender land to the Palestinians as part of a peace deal. In addition to the government’s shift away from leftist politics in 1977, the Lebanon War in 1982 was a second action which damaged Israel’s international standing. The inclusion of these two actions helps balance the book’s routine critiques against Israel’s leftist opponents. Though these opponents would undoubtedly include other actions that damaged Israel’s standing, Muravchik makes a thorough defense for how the global community has used a double standard when criticizing Israel.

Indeed, one of the book’s major complaints is how the international community routinely admonishes Israel without treating Israel’s neighbors with the same level of scrutiny. For instance, the UN General Assembly has passed numerous resolutions criticizing Israel for human rights violations, but this same body rarely if ever addresses human rights violations in other neighboring countries. According to the book’s calculations, roughly one-fifth to one-quarter of all resolutions passed in the General Assembly specifically criticize Israel, and roughly three-quarters of resolutions that criticize a specific country apply to Israel. Meanwhile, Human Rights Watch concentrates more heavily on Israel than on any other country in the region even though Freedom House ranks Israel as more free than these other countries, even when only considering the West Bank and Gaza, which are either better or roughly the same as neighboring countries. This double standard may make one wonder if human rights organizations’ true motivations are political or altruistic. In addition to comparing Israel to its neighbors, the book also makes the argument that the world holds Israel to a higher standard than China. Because of China’s strength and prosperity, the global community has become eager to please China in order to gain an economic or political advantage, but the global community mostly ignores China’s human rights violations. Moreover, the various organizations who promote the Boycott, Divestment, & Sanctions (BDS) campaigns against Israel, including some mainline protestant churches, have not promoted these same campaigns against China. Muravchik speculates that even though Israel has military supremacy over its regional neighbors, the country would face less criticism if its economic influence was stronger. The book’s arguments are strongest when making this case that the global community has used a double standard when criticizing Israel without criticizing its neighbors or China.

Though the book does make a good case for how Israel has faced a double standard, the book does not make as strong of a case for how the global community’s realist political theory has always been detrimental to Israel’s interests. In the first chapter, Muravchik argues that because the Arabs had a larger population and controlled oil supplies, realists would naturally favor the Arabs over the Israelis. He elaborates, “The Zionists or Israelis managed to prevail only in those rare instances when ‘idealism’ prevailed.” The book makes a good argument for how Europe’s dependency on oil helped the socialists use realist logic to turn Europe against Israel after the Yom Kippur War. However, Israel does appear to have prevailed in the United States during the Cold War at least in part because realists sought to contain the Soviet Union in the Middle East, but the book does not address instances when realism may have benefited Israel. Perhaps Muravchik could have further qualified the word “prevail”. For instance, in 1975 Henry Kissinger, who is not well renowned for his idealism, defended Israel and helped defeat Arab attempts to expel Israel from the United Nations. Why would this instance not constitute Israel “prevailing”? A couple of sentences could perhaps answer this question.

Notwithstanding this slight critique, Making David into Goliath remains an excellent read for anyone who wishes to better understand how the left turned against Israel even though the country was once the left’s darling. Not only does the book give a thorough retelling of the important historical events which affect Israel today, but its analysis helps put more recent events into context. The Iran deal over its nuclear program would certainly deserve a future addendum to this book, but the drop in oil prices over the past year would also deserve further analysis. The oil weapon will likely become less potent as American shale oil and gas companies have replaced the Arab countries as the key “swing producer”, so perhaps Israel could benefit as realist calculations change across the globe. As the Middle East continues to change rapidly, Muravchik’s work will nevertheless remain an important primer for understanding this region.