Women at War & the GOP

At the GOP debate on Saturday night, Martha Raddatz raised a question regarding the integration of women into direct ground combat occupational specialties such as the infantry, armor, and the special operations teams. The question focused specifically on compelling women to register for selective service and Rubio, Bush, and Christie all endorsed the notion because of their support for integration.

They should not have.

On the question of integration, here is what I wish they would have said:

The question of whether to integrate women into direct combat ground units is difficult; not because I lack confidence in my answer but because any answer is perilous. Obviously, there’s the political peril – for the question of whether women should be assigned to direct combat is asked as a facet of larger questions concerning the equality of men and women, and perceptions of basic fairness. In today’s hyper-sensitive, politically correct culture, to suggest that men and women are not, in fact, interchangeable or that men and women, by nature and by the design of nature’s God, are different and that this difference sometimes manifests in different abilities and, consequently, different opportunities, is to risk accusations of misogyny.

But there’s another far greater peril: and that is to be understood as not appreciating the profound sacrifices that our military women have already made in the service of our nation. Even without their being in direct combat roles, irregular warfare has so degraded the distinction between the front line and support roles that women have been dragged repeatedly into the fight. We must never forget that in the army alone over 9,000 female troops have earned the Combat Action Badge, hundreds of others have earned valor awards, including several Silver Stars – the nation’s third-highest award for courage under fire. And we must always remember the more than 1,000 women who have been killed or wounded in combat activities. I dread being seen as downplaying or ignoring the courage, passion, and commitment of our military women. I do not downplay it. I do not ignore it.

But nor do I ignore or downplay the testimony of those military professionals who testify that women being drawn into the fight is very different from intentionally integrating them into direct ground combat positions. Just consider the issue of injury. We’ve been focusing on the question of whether women can meet the same qualifying standards as men. Of course they can; American women are heroic and some will qualify – indeed, some already have; including Captain Kristen Griest and Lieutenant Shaye Haver, our nation’s first female army rangers – who accomplished what 58% of men regularly fail to do. So women can qualify: but what then? Army and Marine combat research reports indicate that in basic combat training women suffered injury at more than twice the rate of men. Particularly, injury risks were most prevalent in occupational specialties requiring regularly moving on foot for extended distances under heavy loads. This is the coin of the realm for infantry and special operations. Physiology matters: on average females possess significantly less lean body mass, a slighter build that affects stride and stride frequency as loads increase, smaller aerobic and anaerobic capacity, and less absolute VO2 max production than males. Beyond rendering women far more susceptible to musculoskeletal injuries, the physical differences manifest in lower performance in negotiating obstacles, evacuating causalities, and registering hits on targets while firing weapons while fatigued.

Again, at the risk of seeming disrespectful to our heroic women, the question is this: if you’re offered a piece of equipment that, at its best, will perform equal to the equipment you’re already using but will break twice as often, why would you use it? When it comes to making peace through killing the enemy and blowing things up, if female combatants do not advance combat effectiveness then why ought we to integrate them into the direct combat force?

But we needn’t – we ought not – limit the discussion to physical concerns. Infantrymen find it famously difficult to describe the mysterious chemistry that forms in and that forms an infantry unit. One, retired Marine Lieutenant General Gregory Newbold, phrased it this way:

Members of such units deliberately reduce the individual and collective level of humanity and avoid all distractions so that its actions are fundamental, instinctive, and coldly efficient. Polite company, private hygiene, and weakness all step aside…In this direct ground combat environment, you do not fight for an ideal, a just cause, America, or Mom and apple pie. You endure the inhumanity and sacrifices of direct ground combat because, “Greater love hath no man than this, that a man lay down his life for his friends.” This selflessness is derived from bonding, and bonding from shared events and the unquestioning subordination of self for the good of the team. But what destroys this alchemy – and, therefore, combat effectiveness – are pettiness, rumor-mongering, suspicion, and jealousy. And when fighting spirit is lessoned, death is the outcome.

There is a reason, Gen. Newbold reminds us, that we tend to send young men to war. Eighteen year olds, overloaded with testosterone, are quite convinced regarding their invincibility. This leads to unsavory antics in civilian America but is ideally suited for the combat zone. “Why then,” the general rhetorically wonders, “do we suppose that sexual dynamics – or mere perceptions thereof – among the most libido laden age cohort in humans, in the basest of environs, will not degrade the nearly spiritual glue that enables the infantry to achieve the illogical and endure the unendurable?”

But it’s not just that sexual dynamics will disrupt unit cohesion because all the men might behave like moose in a rut. Men, even testosterone-addled teenagers, have – or ought to have – a natural predisposition toward gallantry. We expect the men on a sinking ship to give up their seats on the lifeboat to women or to shield their female co-workers from the terrorist’s bullets with their bodies – as happened in San Bernardino. But in combat, while it’s true that the leaders of fighting units must never waste the lives of their men they nevertheless must be willing to spend them. If women are in their ranks, then either gallantry risks jeopardizing combat effectiveness as commanders honor it and shield their women from danger or commanders override gallantry and treat their women indiscriminately, thereby – to my mind – jeopardizing an important facet of human nature. As the son of a mother, as the brother of a sister, as the husband of a wife and, most powerfully, as the father of a daughter, I know – I know – that included in the array of obligations (not status symbols) of being a man is the protection, care, and preservation of our women. Even, those women who, themselves, don’t necessarily need male protection.

Now, having said all that, I want to get back to the heroic American woman. There is a place for women in the defense of the nation – there always has been. Whether serving in support units, the medical corps, the WAC, the WASP, producing the tools of war in factories or shipyards, keeping the families and civil society strong, or in any of the other myriad ways that women have served at home and abroad in times of national emergency, women have done and continue to share the burden of national defense. In today’s irregular wars, women have a special role as well.

In many cases, women prove themselves to be better at human intelligence gathering than their male counterparts. Everybody knows that the most informed people in any given village anywhere in the world is likely to be the village women. Especially in the Middle East, local women are more likely to talk to American women than to American men. In some circumstances it makes military sense to embed women in infantry or special operations teams in order to interact with local women. In all circumstances, especially with today’s fluid frontline, women should be well-equipped to defend themselves and those around them and so ought to be trained-up and combat-ready and allowed to achieve whatever level of combat training they are able.

Should everything go to hell-in-a-hand-basket and the supply convoy gets ambushed, or the country finds itself in a fight for national survival, it will be an invaluable asset if the women in our midst have a ranger tab on their shoulder. And they will undoubtedly display, once again, the fullness of their courage, commitment, and competency. But they needn’t be integrated into direct ground combat units to do that.

Marc LiVecche, PhD, is the managing editor of Providence and the Scholar on Christian Ethics, War, & Peace at the Institute on Religion & Democracy.

Image: U.S. Air Force Staff Sgt. Alyssa Gomez peers down the scope of her M24 Sniper Weapon System at the Nevada Test and Training Range on Nellis Air Force Base, Nv., May 11, 2012. Gomez, a sniper assigned to the 99th Ground Combat Training Squadron, is the ninth female in Air Force history to become a sniper after graduating from a 19-day sniper course on Fort Bliss, Texas. (Department of Defense) 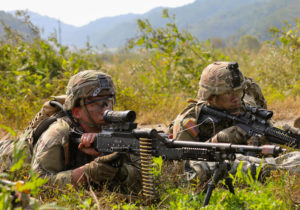