The death of missionary John Allen Chau last week divided observers. It shouldn’t be surprising; nowadays division seems about the only thing that unites us. But Chau’s death, which occurred while he was attempting to bring the Gospel to a neolithic tribe on an island in a remote expanse of the Indian Ocean, provokes questions about the role religion plays in relations between peoples and about encounters between the Western world and primitive or developing cultures. Therefore, his demise was especially apt to ignite contemporary passions, and, predictably, supporters and critics have been at verbal fisticuffs on social media platforms, and in columns and comment sections.

What are some of the ways to think about the whole affair? Not only as its own event but as it relates to American international affairs?

Religion, of course, has always claimed an important place in US foreign policy. A major force in shaping American identity, religion naturally influences our ideas about the world and the role and responsibility we have beyond our borders, including our self-perception as a chosen or exceptional people and our willingness—or sense of duty—to spread our values across the globe. While the religious voice in American life has never been univocal—but plays across broad denominational registers and along a progressive-to-orthodox spectrum—its variants nevertheless agree on the basic Christian duty to show love and compassion to all people. The Constitution’s “all men” who are endowed with the inalienable right to “life, liberty, and the pursuit of happiness” was never supposed to refer only to white dudes on the eastern seaboard. Just how any individual Christian will manifest this love to neighbors both local and global will, of course, depend substantially on the specific theological stream in which he or she stands.

My fundamental observation about the range of responses to Chau’s actions amounts, really, to a suspicion: many of those who disagree with his actions—and with his Christian missionary zeal more broadly—also have a general disdain, or distrust, for notions of American exceptionalism that lead to intervention abroad and the export and manifestation of a values-based foreign policy.

This can be seen in the critique that Chau, and by extension Westerners and specifically Americans, should just leave indigenous people, well, “the hell alone.” On the surface, such a critique represents what might seem to some a noble sentiment. But, really, what does it say?

If we think the industrial, technological, medical, artistic, political, and other advances we’ve made in modern life have made life more easily, pleasantly, effectively, and confidently lived; if we think these advances are worth having, then what does it mean to intentionally withhold them from others?

Don’t get me wrong. We mustn’t make a fetish of progress. Progress for the sake of progress, it’s been pointed out, is the philosophy of the cancer cell. The uncritical pursuit of “improvements” leads to the loss of much that is good, beautiful, and true about our inherited traditions. I once saw a magazine advertisement depicting an SUV careening at high velocity past a sign that read, “DANGER: MINES.” The caption warned, “Speed without accuracy is nothing.”

At the same time, we must avoid sentimental nonsense about the unadulterated nobility of primitive peoples and their cultures. The right progress—the kind that directs us to where we ought to be going—is a great good. Some aspects of a given culture might well need to be changed. Yes, there is judgment in this. But one of the aims of Providence has been to show how judgments can be made—and acted upon—in love.

Regarding his desire to evangelize the Sentinelese, Chau stood in the company of those who believe in the call to a particular expression of love with a special urgency. For evangelicals, souls stand on a knife’s edge between forever lost and eternally saved. While there are broad differences between just what this means and what it requires, all evangelicals agree that faith in Christ is essential for human flourishing, and that those who have this faith ought to share it with those who do not. Dissenters can, and ought, to voice their dismay all they want. But they ought also to be careful. The same zeal that animates the evangelistic passion animates much else.

It has always been folks just like Chau who have been among the most ardent supporters of humanitarian and human rights responsibilities on a global scale. From the British anti-slavery movement to opposition to the immolation of widows in sati, to foot-binding, to human trafficking and forced prostitution, to support for massive increases in aid to Africa, including $15 billion to combat AIDS—there is much that evangelical energy has helped bring to pass—and which might not have come to pass without that energy. Douse the spark that led Chau to that island, and you risk extinguishing the source of enormous good in the world.

Without doubt, cultural exchange—and adaptation—is a two-way street. We all have a lot to learn from one another. How we can best come together seems to be a perennial problem. Europe is struggling with its inability to help whole cohorts of Middle Eastern and Central Asian immigrants to assimilate. The voluntary and sometimes involuntary coming together of diverse peoples—whether through mass migration, globalization, or, historically, empire-building—is always going to be an amalgam of profit and loss. Among the struggles is how to navigate the dilemma of adopting new cultural practices and abandoning old ones without losing the good of our traditional particularity. An oft-used phrase—common among evangelical missionaries—remains a helpful guide: “in essentials, unity; in doubtful matters, liberty; in all things, charity.” The devil remains in the details.

On occasion, we’ll almost assuredly get it wrong. Sometimes we’ll make a hash of those details while, at other times, the whole project might be wrong. Some insist Chau got both the details wrong and pursued the wrong project. Where do I land? Regarding his general endeavor to preach to the Sentinelese, it’s not a dodge to say that, ultimately, I have to remain agnostic. We all do. Evaluation, I should think, must hinge on whether Chau honestly believed he had a genuine command from God to go to those people. And that’s a question that only Chau—and God—can answer.

If, it turned out, he was simply trying to find a daring thing that would prove—to himself or to others—the boldness of his faith, then I think that his missionary zeal was more about him than the mission. And then his act would appear a reckless risk of life, possibly vain, and certainly foolish.

But throw God into the mix and all bets might be off. I say “might” because even still a modest qualifier would yet remain. God might well have called Chua to bring the Gospel to those people, but this is not to say that Chau was called necessarily to martyrdom. And here we come to the question about details. The martyrdom might have come about because of Chau’s method, or lack of one. In following God’s commands in most (all?) cases, we ought to give ourselves not only the best opportunity to meet the requirements of the command, but to do so wisely, efficaciously, and while mitigating avoidable risk to ourselves and to others.

There’s room to think Chau could have done things differently. Might he not have set up a team of the best experts he could find to advise and assist him? Should he not have discerned best possible practices by studying the tribesmen and other outside encounters with them and with similar tribes? Couldn’t he have developed a patient, long-term strategy to somehow slowly build familiarity and, if possible, trust with the tribesmen before making a final effort to come into their presence? Couldn’t he have done something more, anything more, to better his odds? Couldn’t he have done his homework?

Surely, the answer appears to be yes. Chau’s actions appear impulsive and unnecessarily rushed. Still, we are now confronted with a curious thing. Even if we accept that Chau’s actions were rash and, apparently, amounted to nothing more than his death, there is, in the great economy of God, room still for wild success.

History teaches us that the living can help even a foolhardy sacrifice to not have been made in vain. There can be, in subsequent action, a kind of redemption. For instance, people who had never before even heard of the North Sentinelese people are now praying for them. What good might come of this, and the sparked imagination that might follow? Whatever good follows will not, to be sure, make the act itself right—if it was indeed wrong. A bastard born of an adulterous encounter who goes on to do great good with his life does not thereby bring praise to the adulterous affair. But it does point to the great mercy that provenance does not overly-determine destiny, and that history is never entirely out of our hands.

Marc LiVecche is the executive editor of Providence, and the McDonald Visiting Scholar at McDonald Centre for Theology, Ethics, and Public Life at Christ Church, Oxford University. 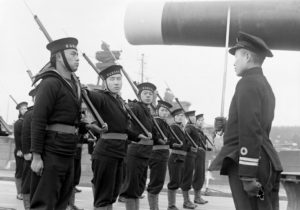