Symposium: Light Up The Darkness- Foreign Policy and Christian Missions

From Missionary Kid to Global Bridge Builder by Joshua Walker

The Religious Sources of Russian Conflict by Matt Gobush

Preachers and Spooks by Ben Palka

The American Missions in Korea by Robert Kim

The Role of Morality in International Politics by Mark Amstutz

Christian Missions: Divine Calling or Cause for Concern? by Drew Griffin

What did Western Civilization Ever Do for Us? by Daniel Strand

A Path to Submission: Michel Houellebecq, Sex and History by Micah Meadowcroft

The Assyrian Mind by Peter Burns

Articles in this issue Eric Patterson contends in Just American Wars that the US is unique because of how it considers ethical and moral dilemmas when it fights. Particularly, the country’s democratic institutions force any politician who wishes to engage in a war to explain to voters, civil society, and other parts of the government why the war must be fought. What Did Western Civilization Ever Do for Us?!? A Qualified Defense of the West The Role of Morality in International Politics

What is the role of moral values in the conduct of foreign relations? Although many answers have been given, three major traditions predominate: realism, idealism, and principled realism. 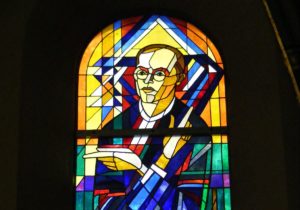 A Conflicted American Perspective on Dietrich Bonhoeffer: Review of Haynes’ The Battle for Bonhoeffer

Notwithstanding Stephen Haynes’ professional reputation amongst Dietrich Bonhoeffer scholars or his prior excellent corpus of scholarly writings about the German pastor, his current book categorically fails to satisfy. The Religious Sources of Russian Conduct

To better grasp Russian conduct, past and present, we would do well to understand its religious sources in Orthodox Christianity. The American-led Protestant missions in Korea achieved perhaps the most rapid and complete transformation of a nation in the history of Christianity, but they disappeared into almost complete obscurity by the time that the Korean War forced Americans to pay attention to Korea. Preachers and Spooks: Should US Missionaries Collaborate with US Intelligence Services?

Should US missionaries collaborate with US intelligence services? What if one’s home government invited the missionary to use lethal authorized force against a known terrorist target? The Right Side of History: How Reason and Moral Purpose Made the West Great, by Ben Shapiro (Broadside, 2019). This… American Christians should recognize and promote these missionaries’ efforts that both advance the Kingdom of God and ensure a more peaceful world.

Christian Missions: Divine Calling or Cause for Concern?

The impact of American missionaries on American foreign policy is three-fold: it can be applied outward to other nations, inward to our own, and upward into the official foreign relations apparatus.