While probably the worst ecological disaster in the nation’s history, the full extent and damage caused by the massive oil spill off Israel’s coast is still to be determined. So too is the spill’s provenance and whether the catastrophe was simply an accident or an act of eco-terrorism. Last month, as the first of more than a 1,000 tons of tar began washing up on Israeli beaches, Gila Gamliel, Israel’s environmental protection minister, made an early claim insisting the spill was an intentional attack by Iran. Her ministry believes they have identified the ship responsible as a Panama-flagged vessel, formerly owned by Iran, and illegally shipping Iranian oil – some of which they deliberately unloaded in the waters off Israel. The claim is not universally accepted by the Israeli government.

If it were to turn out to be an intentional act, it would fall under what has come to be variously called grey zone, unarmed conflict, hybrid, or soft warfare. Ill-defined and not always precisely analogous, such terms are efforts to describe deliberate hostile actions fail to meet what is classically understood as armed conflict or that fall short of crossing the legally recognized threshold of war. While these terms describe activities that have, if in different ways, always existed, technologies and the composition of international rivalries have made hostile actions short of war both more prevalent and more strategically valuable for some state and non-state actors.

Operations deployed into that space between peace and war are notoriously tricky to respond to. Not only are there problems with reliable attribution—as the oil spill is proving—but scholars differ as to the extent and means by which nations can respond to such attacks. Does proportionality and discrimination allow a nation to respond to a non-lethal attack with deadly—or potentially deadly—force? Smaller scale analogies can be found in questions of whether a homeowner can use deadly force to protect property—opinions, and state laws, differ. Returning to the international arena, can you only respond to such harms in strictly commensurate ways? What would that mean in the case of an ecological attack? It is obtuse to suggest that Israel can only respond by polluting Iranian beaches. Should reciprocating actions be limited to tit-for-tat or is it permitted that they be of a sufficient degree to solidly deter future attacks? What about the risk of escalation? Recent Israeli attacks on Iranian oil shipments have been seen by some as retaliation. However, these attacks seem to be part of an ongoing series of similar attacks between the two nations.

Without doubt, in the case of the oil spill, real harms have been suffered. Over a hundred miles of Israeli beaches have been defiled and closed. Seafood harvesting and sales have been temporarily banned in affected areas. Wildlife—a part of any nation’s natural patrimony—has been jeopardized. These are not nothing, but is the modest economic hit and the harm caused to sea turtles sufficient to permit harms to human beings? So say yes, and, to be sure, Christian intelligence has much to contribute to the subject. Providence is well-positioned to offer a venue for doing so.

In a sorrowful scene in Once An Eagle, Sam Damon visits his mortally wounded friend in the rubble of a heavily damaged French church that has been converted into a field hospital. Mostly intact, the transept and the ambulatory shelter rows of wounded, young men pierced and blown apart as they tried to take yet another hill in yet another battle in the Great War. Prior to the recent action, the dying man had walked away from the war. Refusing to move out with the rest of his platoon, he took shelter in the home of a Frenchwoman with whom he had fallen in love during a rest period in the rear. On discovering his absence, Damon, knowing where his friend would be, returned to collect him. Despite being the superior officer, Damon didn’t threaten his friend or order him to return. Instead, he appealed to what he knew was the man’s character. His friend is no coward, he simply no longer believes there is any purpose in the war. After a whole lot of back-and-forth, Damon makes a final appeal. “You can’t live this way,” he tells his friend. “You care too much. Maybe some men can, but you can’t. You’ll dry up and fade away to nothing, you know it. You’ll hate your own guts more and more each day.” It’s an appeal to the man’s sense of duty and honor and the debt and responsibility he owes to his comrades in arms. It’s a checkmate appeal and his friend knows it. He packs his bags and returns with Damon.

Now, dying, it’s his turn to light into his friend. “You did what you felt was right, Sam. But you’re wrong…What good was it? Sure I went back…am I better off now? Is anybody in this whole sad fucking world going to one notch better off for my being rolled in a poncho and shoveled under? I think not, Sam. Not any way that I can see…”

It is a sad and terribly tragic scene. It points to not merely the horror, but the seemingly pitiless pointlessness of war. But despite this—and while sitting in the comfort of my study where nobody is shooting at me—I think the dying man is wrong. The good that is found in a man doing his duty is, if nothing else, the good of doing one’s duty. Now, the obvious caveat must be acknowledged—the duty that one does must be right to do. That’s to say, it must be morally justified. Like I wrote about integrity recently, one’s duty is not right to do merely because it is one’s duty—the Nazis SS had their duty. They should not have done it. Or, better, they should have recognized that there was a prior duty—a higher one—that could never validate the tawdry and perverse parody of duty the Nazis insisted upon.

This calls to mind that section of Ecclesiastes in which the Preacher insists that it is better to be a living dog than a dead lion. I remember hearing that as a child in church and feeling very alarmed. I knew, I knew, that it couldn’t possibly be true. Of course, I had none of the resources to articulate what I tacitly believed so passionately, nor the intellectual faculties to work out a solution. I now understand that the Preacher is speaking about very qualified circumstances. If there is no God to give life meaning, if there is only death and nothing else that awaits every human individual in the closing moments of their days, then—and only then—would scrapping together whatever sort of life you could be more meaningful than dying well.

Because—thanks be to God—this is not so, then the doing of one’s right duty—whatever the cost—is, always, the greater good than shirking it—whatever the seeming benefits. It’s more complex than this, of course, as most things are. Duties sometimes conflict and in such cases the greater duty overrides the lesser. But the principle remains intact.

What good befell Damon’s dying friend? He did his duty. He stood by his friends. He fought for a high and just cause. He stands as a moral exemplar to exhort the imagination and moral vigor of those who stood with him or who would learn of his witness later. That all of this is terribly romantic and bordering on the sentimental does not mean it is less true. Death will come when it will come. Meanwhile, let us live like lions.

I am struck by the fact that fact that one of the most tragic figures in literature was himself struck by the debilitating sorrow of moral injury. Anyone who has read much of what I’ve written (say, this and this and especially this) will know that moral injury is doing or allowing to be done something that goes against a deeply held morally norm. My recent discussion of integrity, mentioned above, touches on this. One violates their integrity when their beliefs do not manifest in their actions. This violation registers as cognitive dissonance. When the stakes are high enough, it can register as a moral injury. I took pains to insist that integrity must be understood as something more than merely consistency between belief and action. It must be consistency between right belief and action.

However, it more than of passing interest to acknowledge that because a moral injury is doing something that goes against a deeply held moral norm, it does not actually require that the norm be true. It only requires that the actor believes it is true. This can be seen in the terribly tragic person of Javert – the anti-hero of Victor Hugo’s extraordinary Les Misérables. Better known, perhaps, for his depiction in the Broadway musical, Javert is a cold, mechanical legalist. The perfect personification of the rigidity of law, Javert cannot abide lawbreakers. And, so, when he turns away from a strict application of the law and shows mercy to Jean Valjean, the resulting effect on his sense of personal integrity is catastrophic. Like so many of our nation’s warfighters who in their grief over what they have done take their own lives, Javert sees no way forward for himself.

Another tragic point of connection between Javert and many warfighters is that we are sometimes mistaken in our belief that we have done something that goes against a true moral norm. Too many of our military personnel believe that the very business of warfighting – at its most basic the killing of other human beings – is always morally wrong, even when necessary in war. Against this, the Hebraic tradition – on this point best articulated in the just war tradition – has always understood that killing comes in different kinds: including that kind that in certain cases, including those in which nothing else will sufficiently protect the innocent or correct a grave injustice, is morally appropriate. Javert, who ought not to have worried that his magnanimous display of appropriate grace and right mercy was morally wrong, reminds us of the importance of properly morally forming our young.

The Disappointments of Imperfect Justice 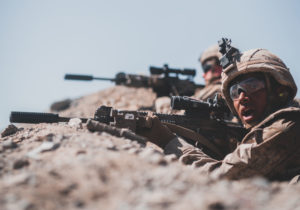