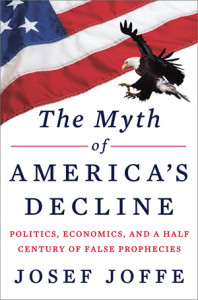 Assumptions about American decline are now common fare in secular and religious circles. Only a decade ago or less, the Evangelical Left shrilly decried an advancing American “empire” in the Bush years. So the Christian anti-imperialists should be pleased by the empire’s irreversible decline, presumably.

Meanwhile, many conservative Christians accept the assumption of American economic and geopolitical decline as intrinsic to its secularization and moral decline. God is punishing America, they surmise, as He punished decadent Rome.

Except maybe the decline is not really a decline, at least according to Josef Joffe in his The Myth of America’s Decline: Politics, Economics, and a Half Century of False Prophecies. He traces the long history of American Declinism, which across 60 years assumed America was being left behind by the Soviets after Sputnik, by Third World revolution and tumult after Vietnam, and the 1973 oil embargo plus the Iranian Revolution, by prospering Japan during American stagflation, by the emergent European Community after the Cold War, and finally by fast-growing China.

Yet in each case, Joffe recalls, America endured and surpassed its putative successors, including ultimately, he believes, China, whose cronyism and corporatism will inevitably curtail its dramatic growth rates, a prediction maybe actually validated, since the book’s publication, by China’s current relative slump.

America has an inner social and economic resilience typically absent among its rivals, Joffe declares, and which critics and doomsayers, chiefly American themselves, too often overlook. Dating to its Puritan forebearers, America historically has a unique self-introspection about its own failures and sins, prompting constant anticipation of impending divine judgment and fall from grace. This American preoccupation with its own jaded soul ironically is a source for constant reform and adaptation, Joffe believes, fueling an ongoing dynamism that other countries and cultures rarely replicate.

Joffe observes that American share of global GNP of about 20-25% has remained remarkably constant for the last century excepting after WWII, when the rest of the industrial world was in ruins. China’s share has been growing, but Europe and Japan, now joined by stagnant petro-power Russia, have been losing share. No power has the capacity to approach America militarily, and America will remain unsurpassed in the best universities and in most fields of science and technology.

Among the great powers, America is the only one, excepting India, with a robustly growing population, thanks mostly to immigration. China faces a potentially bleak demographic future with a disproportionately elderly population. And even if China’s declining economic growth rates remain twice the U.S. growth rate, it cannot catch up. Then there is America’s unique global cultural power, plus its international network of alliances, compared to relative isolation for China, surrounded by neighbors who fear and coalesce against it.

Joffe, speaking as a German newspaper publisher of Jewish background who often teaches in the U.S., offers a bracing and refreshing international critique of American self-absorption embodied in chronic Declinism. Joffe thinks that true American decline is possible only if America itself decides to decline, which he believes no superpower has ever done. He discerns in the current obsession with decline an American desire to escape from global responsibility. Christians and especially Evangelicals, preoccupied with a much more narrow strata of events and impressions, can learn much from Joffe, who speaks with the grim historical reality of a Jewish European who realizes that American leadership and confidence are essential for international order.

Can Christians operate from a similarly broad historical and international perspective in appreciating the geopolitical and moral necessity of American global hegemony? The Evangelical Left is unlikely to abandon its obsessive and contradictory anti-Americanism, wanting American apology and retreat while at the same time demanding America reshape the world according to the Evangelical Left’s policy desires.

If America, or at least its cultural commanding heights, continues to secularize, conservative Evangelicals will have to decide how or whether formidable American power can be deployed for good. Their retreat from serious public policy engagement will miss important opportunities to influence America’s global predominance. Even a supposedly post-Christian America still carries within its cultural and political DNA the burning embers of biblical justice that Evangelicals can and should fully exploit for the global common good.