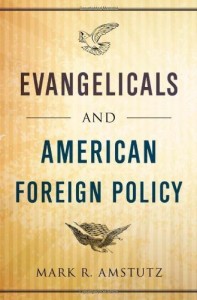 The primary aims of Mark Amstutz’s Evangelicals and American Foreign Policy are twofold. First, the veteran Wheaton College professor of political science intends to provide a “more compelling account of Evangelicals’ influence on America’s role in the world” than has been previously appreciated. This endeavor is important not least because what American Evangelicals have already done involving global affairs will have much to critique and commend regarding the increasing work they will do, especially given the shifting of Christian political influence in America away from the mainline denominations and onto the Evangelicals. In light of this analysis, the book’s second, and primary, task is to issue both a challenge and a caution. The challenge is to call American Evangelicals to formulate a coherent framework for thinking about foreign policy. The caution comes with reminding Evangelicals that “religious groups make their most important contributions to the moral life of nations when they relate transcendent norms to domestic and international social, political, and economic concerns”. This is to say, Evangelicals must find their foreign policy voice without losing “their focus on religious matters.”

The book is divided into two major parts. The first four chapters explore the rise of Evangelical global engagement. Chapter one, in describing the context in which Evangelical faith influences American global engagement, addresses four issues: morality and foreign policy, religion and the development of America, foreign policy and Christianity more specifically, and the integration of moral values and faith with statecraft. Chapter two traces the origins and development of Evangelicalism in the United States. The third chapter details the substantial if sometimes indirect role that American Evangelical missionaries have played in the conduct of American foreign relations. Concluding this section, Chapter Four maps the conceptual features of Evangelical social and political ethics, including: the primacy of the spiritual realm, the dual nature of Christian citizenship, the imperative of human dignity, the priority of individual responsibility, and the need for a limited state. With this in hand, the second section, chapters five through eight, brings the Evangelical worldview to bear on particular cases, focusing on global poverty, America’s ties to Israel, and a collection of other foreign policy issues including human trafficking, international religious freedom, and climate change. Concluding the volume, chapter nine offers both critique of past practice and constructive suggestions for developing a more coherent strategy for Evangelical global engagement. Here Amstutz offers a particularly Augustinian trajectory, endorsing Christian realism’s assertions regarding the radical dichotomy between the claims of the heavenly kingdom and the claims of temporal life; the ubiquity of human sin; and the paradoxical dimension of human nature, expressed in both self-assertion as well as self-donation, as consistent with core Evangelical assumptions.

One of the book’s decisive strengths is its ability to rally an important counter-narrative to the increasingly strong populist retreat in America away from international responsibility, most particularly regarding military intervention abroad. Against this trend Amstutz reminds us of the Evangelical grounds for understanding “that norms, especially moral values, are an inescapable element of all human actions, whether individual or collective.” Indeed, for a government to meet its sovereign responsibility for the preservation of justice, order, and peace, some minimal morality is necessary. For Amstutz, this necessity is clearly the case regarding such concerns as respect for human life, social responsibility, freedom from arbitrary influence, and the like. For anyone, Evangelicals included, moral principles “contribute to the development and implementation of foreign policy by…helping to define goals and purposes…[and by]…providing a standard for judging action, and…offering inspiration for action.” For Evangelicals, these moral values inexorably manifest in the belief that U.S. security and prosperity – our interests – include meeting the responsibilities incumbent upon us not just as human beings but as followers of Christ. These responsibilities result, necessarily so, in deep global engagement.

The portrait Amstutz draws of the career of Evangelical foreign policy activism is no subject hagiography. He is clear about what he regards as the institutional, intellectual, and, indeed, theological shortcomings of Evangelicals that sometimes manifest in their attempts to influence U.S. policy and world events. He strongly warns against both attempting to speak authoritatively on matters of global policy without actually possessing adequate competence and knowledge as well as forgetting that “specific policy recommendations are the least significant contribution that religious groups can make.” Rather, the church’s key competence is moral analysis and the fundamental “task of the church, or of religious associations…, is not to tell government officials what to do, but to help structure the analysis of important moral issues facing both individual nations and the international community.”

In light of the challenge of the church simultaneously participating in conversations regarding the American expression of power abroad as a part of faithfully manifesting its responsibility to care for her neighbors, while not forgetting her primary focus of proclaiming good news to a world sorely in need of it, Mark Amstutz’s book is enormously helpful in guiding Christians to competently pursue matters of public affairs advocacy. His recommendations that Evangelicals should focus on deepening their understanding of the problem or issue at hand; on identifying and explaining how biblical principles address those problems; on maintaining core distinctions such as between the two kingdoms or good and evil; on illuminating and applying political theology; on emphasizing teaching over advocacy; and on keeping humble aspirations are wise prescriptions for American Evangelicals who wish to engage in foreign policy while not forgetting that they’re Christians.